Being an author and publisher as well as a photographer, one of my pet projects is to take candid shots of people reading books in public. Later, if you zoom into the cover, you can sometimes easily identify the book being read. Other times, you might see only bits of the title or author's name, and then identifying the book becomes a game. A little searching on Amazon is usually enough to find a match for the cover.

Here are some of the shots I've taken around the Port of Friday Harbor -- most of them in the past year -- with the books identified in the captions.

Wait! That last one doesn't show anything readable on the cover! Wondering how I identified it? By zooming in far enough, I was able to read text on the page, which I then Googled. Talk about reading over someone's shoulder! 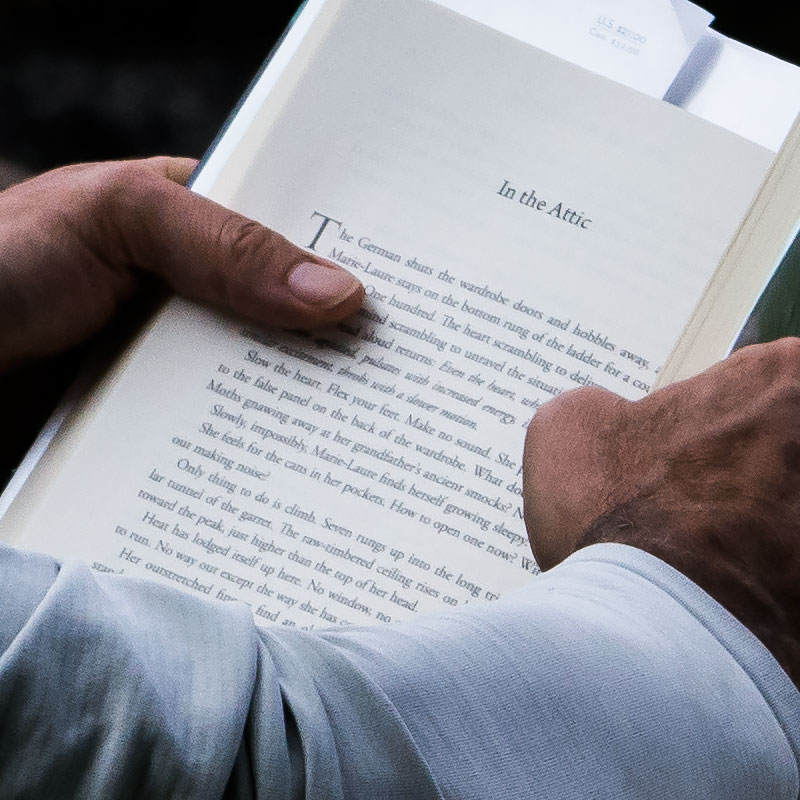 Finally, here's a photo and close-up with a book I couldn't identify. If you can help, please tell me in the comments! 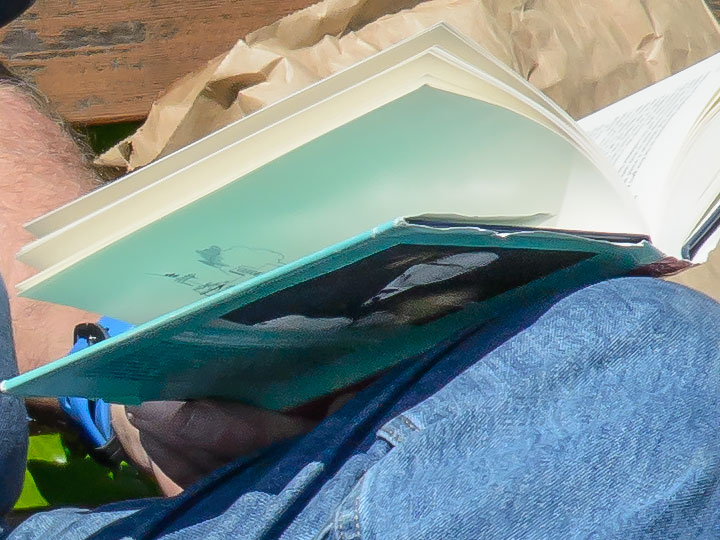 
One Saturday afternoon last October, I was hurrying downtown in Friday Harbor to photograph the annual Farm Parade when I came upon the following scene in Sunken Park.

I knew at once this was something new to me. The swords and protective clothing were too heavy for normal fencing, and the movements too aggressive and disciplined for fantasy reenactment or role play. But I only had time to snap a few shots before hurrying on.

Luckily, a woman walking the same way tipped me off that these two young swordsmen were regular visitors to the park. So, I went back two weeks later and found them again.

Their names are Mattias Anderson (pronounced ma-TEE-us) and Ellery von Dassow, and they're practitioners of an art called medieval longsword. It's part of an international revival movement called Historical European Martial Arts (HEMA). Though their swords are blunt, their movements are authentic, based on manuals written by German and Italian masters of the Middle Ages. The bouts have rigid rules, and protective gear is required!

Mattias and Ellery are both San Juan Island residents, though Ellery goes to university in Bellingham. The longsword events they attend are in Bellingham and Seattle. So far, they say, they're the only two longsword fighters in the San Juan Islands, but they hope others will join them. Weather permitting, they meet in Sunken Park every other Saturday at 2:00.


Posted by Aaron Shepard at 9:16 PM No comments: